The Compound Effect on A Daily Basis 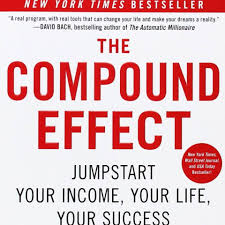 Those of you who have followed me for a while know that I don’t share every detail of my personal life, however I am seeing a trend with my clients that I felt could be addressed using a personal story.

Many of my clients want change, they are unhappy with an aspect or aspects of their lives; relationships, work, finances etc. They know that where they are is not right for them and often they have an idea where they want to get to whether that is to be single, get promotion, a career change and so on but they just look at the chasm between the two points and cannot see how to cross the chasm.

So here is my story! About 3 years ago I decided to take up running, a couple of friends were doing it and it seemed like a good way to burn lots of calories in a short space of time, 2 hours of walking versus 45 minutes of running seemed like it solved the issue of very little spare time and the need to exercise.

Now, I need to point out I am not a natural athlete, at school I loved trampoline, gymnastics and (oddly enough) hurdles, even though I was not good at it. I did not win anything at sports day nor am I ever going to win medals or break records now!

So rewind to 3 years ago, I downloaded the app C25K (Couch to 5K) and followed the plan. I can’t recall the actual plan but it was something like this;

Day 1 – run for 1 min then walk for 1 minute, this repeated a number of times for 20-30 minutes. I thought I was going to die and I was thinking ‘crikey, I can hardly run for 1 minute, how the heck will I manage 30 minutes’? But I kept to the programme.

Day 2 – run for 2 minutes then walk for 1 minute then run for 2 minutes. Again this would repeat for the duration of the exercise plan. I sometimes had to do the plan more than once to accomplish it and some days were harder than others.

This continued until it had built up to a point where it was a consistent run for about 30 minutes. It took me ages to get my 5K to the 30 minute point and it is only this week I have managed to do a 5K in less than 30 minutes.

So as you can see, I did not just decide to run a 5K and do it first time, it took me at least 8 weeks to get to the point I could do a 5K, there are days now when it seems impossible as I am tired, not in the mood or whatever. Every time I went out to run, I built on the day before, I increased my fitness, I decreased the amount of time it takes to do a 5K and now I am working on my 10K. The 10K plan is exactly the same, working on the time and distance by building up stamina, endurance and so on.

I still want to reduce my running time so I can do a 10K in less than an hour, and hopefully it will come with time but I can’t make it happen over night.

There is a great book by Darren Hardy that is called the ‘Compound Effect’, in his book Darren talks about goals and goal setting and about making success achievable, each day build on the day before to achieve what you want.

Teresa May did not make Prime Minister the day she decided to enter politics. Alan Sugar was not a multi-national company and a millionaire on his first day of trading. So basically, whatever you want in life, you can have it but it has to be one step at a time, building on what you have accomplished thus far, then and only then will you get what you want in life. Meteoric success and huge lottery wins don’t come to everyone; they go to the minority but even then it is rare.

Those who conquered Everest did not just get up one day and climb Everest, they trained, they planned they worked hard and then they went for it. Some failed and some won, those that failed did it all again until they got there and those that achieved it went on to other things.

Now I’m not suggesting you want to run a marathon or climb Everest, however the principle is the same; identify your goal, plan, research and then start towards your goal and away you go. Don’t be daunted and think it cannot be done.

Another thing to bear in mind is the Nine of Pentacles in the tarot – this lady has ben focused on her goals, getting what she wants, however she has worked so hard, been so focused she has no-one to share the Rewards with. Make sure you enjoy the path to your success, sharing it with loved ones, having balance and remember to ‘smell the roses on the way’ don’t just lock and load on your goal, achieve it and move on to the next goal. 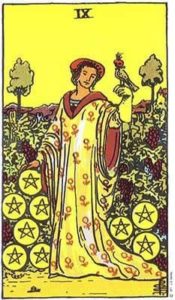 I hope that gives you food for thought, we are but human!

How Are Your Personal Boundaries?