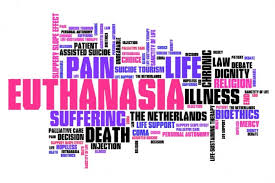 There are many articles written about suicide and what this means on a spiritual level with most people agreeing that there are spiritual implications of suicide, if we ended our life because it was too difficult or we could not cope we will need to come back and finish the lesson we did not complete at some point in the future.

I agree with this but I would add that sometimes the suicide itself is actually part of the Soul Contract; imagine somebody such as Robin Williams who took his own life, this raised the profile of the mental health issues he had as well as the additional illnesses he was diagnosed with, so could it be that a suicide such as his, was for a greater purpose or for the greater good? I believe this is possible but we won’t ever know for sure until we have access to his Soul Plan Meeting (we all have one of these with our Guides & the people we will incarnate with before we are born).

Euthanasia or Assisted Suicide as many refer to it is very similar, but what are the rights or wrongs of this and how does it affect our Karma and future lives?

How is it different from suicide?

I decided to consult my Guides on this matter because I really wanted to know how this fits with our spirituality.

Euthanasia or Assisted Suicide is very similar to suicide but yet different. If it were legal there could be abuse by people doing it on a whim when this was not meant to be their path, this would certainly be an issue because they would not of dealt with their soul contracts and so will need to return to clear it, the balance that was meant to be attained in their karma won’t be accomplished so the unfinished business from past lives will build up, putting them further from Ascension, creating a bigger mountain to climb.

Although both cases involve ending a life early, suicide is usually for very different reasons than euthanasia, generally when the person feels they have no option but to take this course of action whereas with euthanasia the problem is not something that can be resolved with help such as depression, break up of a relationship etc, they are usually terminally ill or degenerating because of an illness such as MS & so they are choosing to avoid a difficult path which may well be their reason for being here.

What is to be gained by staying on earth?

In the event of it being in a medical situation such as a terminally ill patient, some would say this is just the inevitable end but on their terms and to a point this is true, why make someone suffer needlessly right to the bitter end? However there is also the point that when in difficult situations we can be the most inspirational1 think of all those people such as Sue Tomlinson who lived 10 years longer than predicted & raised millions of pounds for others as well as raising the profile of cancer & giving her children priceless memories of her to carry with them, Dr Kate Granger MBE – Hello, my name is…- her campaign changed the way the medical profession treated her & other patients rather than just treating them as faceless people. Look at the author Terry Pratchett; he had such a brilliantly creative mind which entertained millions and yet he was struck down with Alzheimer’s and was ironically a fan of assisted suicide even though he did not follow that path. By going through a degenerative illness or being terminally ill there is compassion to be gained by the sufferer, there is strength to be discovered, they may find their voice over the conditions or treatment available which will bring change for the better to humanity, they may even develop a healing technique that means the illness does not need to be degenerative anymore.

What does this do to our soul contracts?

If we do not accomplish our soul contracts in a lifetime we will have to come back and accomplish it, by ending our lives before accomplishing the mission we came here to do we may also prevent others from accomplishing theirs so unless they built in a Plan B it affects others too. That being said next time we may decide not to set the bar so high, we may decide to accomplish the same end but over more than one lifetime so it is easier to do.

When we return to Spirit there will be a reckoning, we cannot take the route of suicide or euthanasia and expect no ramifications, even if it is only a stern word or more work on our soul in Spirit to teach us more about ourselves, remember there is nothing but love in Spirit so there will be no anger, no judgement etc over actions, we would just need loving help from Spirit family & Guides to resolve whatever it was that left us feeling we had no option but to self terminate.

What about the health professional or person assisting us?

Surely if we are being helped to end our life early the person helping us would also be affected by the actions? Maybe they would need to come back as the person needing to be assisted? Maybe this is their path as they will grow from the experience of helping somebody to die, especially when emotionally invested in the person they are assisting such as a partner or loved one. Again there is no ‘one size fits all’ answer.

Is it right or wrong?

It is not really a case of being right or being wrong, everything that is created or invented is here as a tool for growth, so although there will be cases where euthanasia will be the wrong solution or should not be pursued there will equally be cases where for reasons known only to the soul group it WAS the right path for the individual to go down that path.

Writing this actually brought to mind those who went on hunger strike back in the 1980’s this was a bid to raise their profile, to draw attention and to right perceived wrongs, whether it is the right way or wrong way to actually deal with a situation.

It may ‘feel’ right at the time only to find when we get to Spirit review the situation that a better way may be found we will still grow as a soul and our Higher Self as the repository of all our lives will allow us to access it at any time in the future should we remember the skill of how to do that.

What are the implications?

The bottom line is if we do not fulfil a soul contract, we cannot escape it, these are not one time journeys they are mandatory, much like school, the lessons are there to be learnt not skipped. As with school you cannot graduate if you have not qualified and so with life we cannot have our Ascension if we have not grown from the lessons.

If we do not accomplish what we came here for we will have to come back to complete the mission, this explains why babies or young people pass without having been here very long. Imagine a terminally ill person who takes their life 2 months before they would of died naturally, if they were to reincarnate the 2 months left to them would end as an infant death, cot death etc. Imagine the suicide who dies in their 40’s but should of gone on to be in their 60’s and so when reincarnating only has 20 years to accomplish what they need to and hence die young. This is not a hard & fast rule, each situation is different, it may be subtle but it will be different.

When considering a person who wants to self terminate or a person who has committed suicide, look at their life and try to understand what they wanted to accomplish & why, don’t judge them.

I’d welcome your thoughts on this blog if you feel drawn to comment.