Book Review: There Is A River, The Story of Edgar Cayce

Book Review: There Is A River, The Story of Edgar Cayce

Book Review: ‘There is a River: The Story of Edgar Cayce’ by Thomas Sugrue 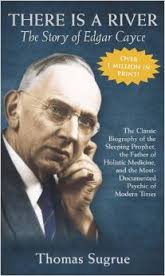 I was recently bought this book as a birthday present & I have to say I thoroughly enjoyed it! Having read a couple of Edgar Cayce based books which I found hard going due to the prose & the reading style he had when channeling I was concerned, however I need not of been.

The book is prefaced by his good friend & the author of the book Thomas Sugrue & has an introduction by Mitch Horowitz, both of whom were in awe of Edgar Cayce & his gifts even though they had not always been so! A common theme in the book is those who liked him, learned to love him, the skeptics always remained aloof.

For any of you developing your psychic gifts this book is a must read, no psychic before or since has managed to equal the magnificent abilities EC displayed, he was never scientifically studied in a controlled condition so we only have the 1000’s of readings which were recorded at the time by his stenographer along with follow up correspondence from the patients, his abilities have never been doubted by those in need. I felt humbled upon reading the difficulties he experienced, the financial hardships & huge setbacks which could of held him from his path or even made him decide it was not worth it at all, if I ever get to be half as good as him I’d be happy!

Edgar Cayce did all his work whilst in a deep trance hence his nickname ‘The Sleeping Prophet’ so had no direct knowledge of his work unless she read the transcripts. His work has inspired me to work on my Trance work & hopefully this will help me reach the Akashic Records like he did so I can provide more help for the people I work with.

EC also gave extensive information on Atlantis & Lemuria which as yet has not been proven or disproved, if you are interested in the ancient civilizations I would highly recommend you read some of his works; just do not expect an easy read, just an informative one!

I’d love to know what you think to his books, do contact me and let me know.

The Power of Positive Thinking

If Only I Were Psychic!

8 Signs You Are A Healer

Echoes of The Past